Electromaps sponsors a new season of the EcoGP

It's not about high-speed, but about showcasing the versatility and practicality of electric mobility with 100% electric-powered production e-cars under different weather conditions - all competitions are designed as endurance challenges, i.e. marathon events of more than 6 hours.

A special thrill under extreme conditions was the kick-off of the 2019 season - the EVRT drag race, the event where the well-known acceleration power of electric cars was demonstrated. 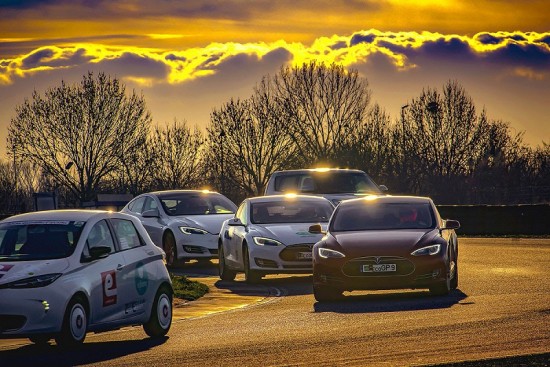 In addition not just electric cars were competing but also a McLaren and a tuned Chevrolet Camaro against Teslas. The result was sobering for the petrol engine. The gas cars landed far behind and could not even beat the Tesla Model X SUV.

After this first competition of the season in Abu Dhabi now the Englishman Zayd Shaikh is leading the eco Grand Prix ranking list, followed by the American Kyle Field and the Englishman Ben Hill.

The next race in Andorra - the Snow and Ice Challenge - will show the marathon endurance of electric cars under winter conditions. A Nissan factory team has expressed an interest in starting with the Nissan eNV Transporter.

The eco Grand Prix endurance competition series has set itself the goal of comparing all available electric car models within the scope of an exhibition with lectures and presentations under the same extreme conditions. Amateurs drive their production vehicles in an environment without charging infrastructure, as Rafael de Mestre - the initiator of the racing series - discovered on his first #80edays trip with his electric car (www.80edays.com) around the world. “A NRGkick adapter is enough to make it”. 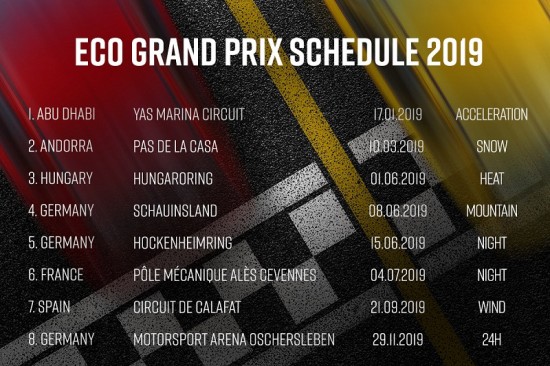 After the race in Andorra the next challenge will be at expected 40°C hotter conditions on 1.6. in Hungary - where the Grand Prix points can be collected in two races of 4.5 hours each - at the Hungaroring as part of an exhibition with an extensive program for visitors. After this event eco Grand Prix will go to Germany.

On 8.6. The revival of the traditional Schauinsland race takes place under new signature - according to eco Grand Prix style fully electric - but not on a closed track, but under real conditions in flowing traffic. If the piloting is successful, there is a commitment to organize this format annually in early summer. Already many months ago, ADAC and Badenova AG & Co KG have become partners. Actually the Freiburg Mayor Martin Horn has already expressed interest in a ride.

The 2019 race calendar includes three events in Germany, where points for the eco GP Germany Cup can be collected separately, the second one - one week later - on 15./16.6. take part in the e4Testival at the Hockenheimring as endurance night race. 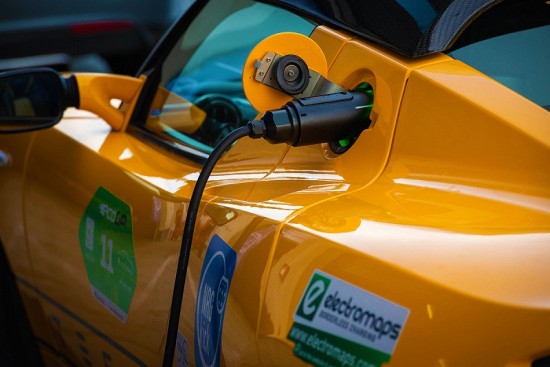 Since every challenge consists of driving and charging, the challenge of the participating teams is quite demanding: coordination and understanding among each other, a driving and charging strategy within the given event time is crucial for success. The thus achieved ranges of the vehicles, driven predominantly in all weather conditions by amateurs, can be followed live over the oficial YouTube channel. At the same time, the topics of electric mobility will be discussed in podium discussions, and visitors to the events will be offered the opportunity of test drives. The point is that those interested, curious and so far undecided can have the opportunity to take their own impression from their own point of view: they will experience the real achievable high ranges of small electric cars that they can test out locally, as well as the higher priced products.

If you are traveling from further away you can charge with the Token or the App of Electromaps borderless, tens of thousands of charging stations in Europe are available to reach every point of Europe with an electric car with just one RFID or app.

Further details about the 8 competitions and the rules can be found at:
http://ecograndprix.com/season-2019

There is a limit to the maximum number of participants per competition, a timely registration is recommended, especially since many places are already taken. In case of questions you are welcome contacting us over email to contact@ecograndprix.com