Electric vehicle sales in Europe in 2022 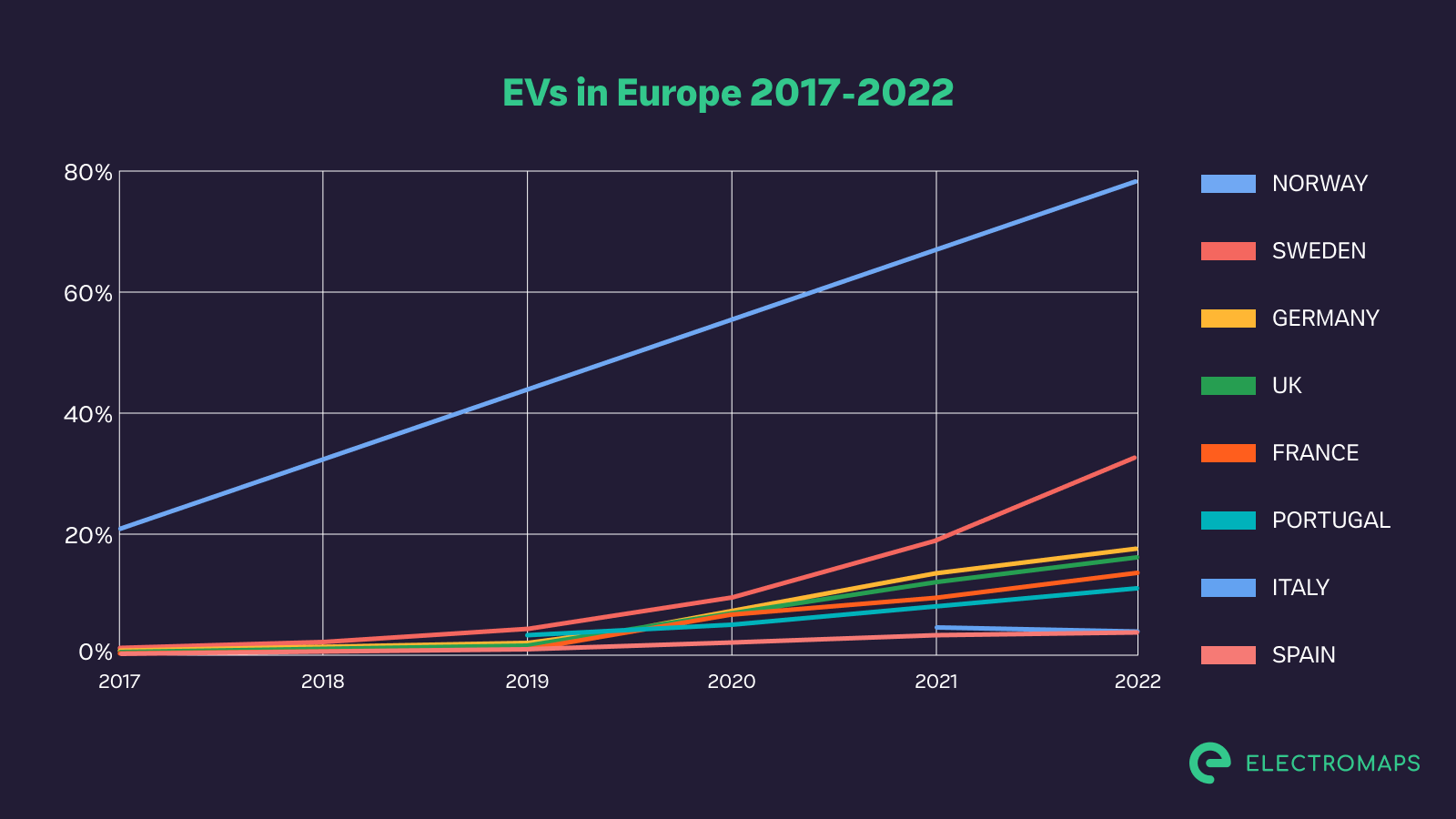 We start the year by reviewing the development of the electric vehicle market in several European countries, analysing passenger car registrations in 2022 to better understand the situation which we are in.

Throughout the year we have been commenting on the evolution of electric car sales, so we have a vision of the first semester and the evolution by quarters.

On this occasion, we look at Norway, Sweden, the United Kingdom, Germany, France, Italy, Spain and Portugal, where the weight of the electric vehicle differs significantly from one country to another.

The electric car accounts for 79.3% of sales in Norway

Electric cars in Norway were close to 80% registrations in 2022, almost 13 percentage points more than in 2021. Without a doubt, this country is far ahead from any other European country and has managed to turn its data around in favour of decarbonisation: in 2017 one out five Norwegian registrations were zero emissions, while in 2022 it was the other way round, that means one out five registrations were not pure electric.

Plug-in hybrids are the second option as a source of energy, being 8.5% of the weight in the market.

Sweden increases electric vehicles by 165% in 2022

Sweden is the country with the most spectacular rise in the last twelve months: going from about 57,500 electric passenger car registrations in 2021 to almost 95,000 in 2022. That is, from 19.1% to 33% market share (among newly registered vehicles). These results are even more significant when we see that registrations numbers fell by 4.4% last year.

The fourth quarter of 2022 was a breakthrough for electric vehicles, which had remained more or less stable at around 30% of sales from the last quarter of 2021 to the third quarter of 2022. In the last three months, passenger car registrations Zero emissions shot up to 44.4% market share in this country.

Petrol is still a very strong preference in the United Kingdom

This country had more than 1.6 million registered passenger cars in 2022, 1.8% less than the previous year. It is a bit surprising that petrol vehicles sales fell by only 79,629 units while the UK is in full transition to electric mobility. Although it is true that electric cars experienced a rise from almost 188,000 units in 2021 to more than 267,000 in 2022, it seems that British do not want to part with petrol cars for their personal use yet.

‍EV sales hit a new milestone last quarter in the UK, exceeding 22.6% of registrations, 139.6% more than in the same period of the previous year.

Germany multiplies electric car sales by 1.3 in a year

The German electric car market grew by 132.2% in 2022 compared to the previous year, with a total of 470,502 registrations of zero-emission passenger cars.

German evolution towards electric mobility has been very noticeable since 2020, the year in which it went from 1.75% to 6.65% of registrations. In the following year, in 2021, electric cars achieved 13.6%; and 2022 closed with 17.7% of the market share. Petrol and diesel vehicles accounted for half of sales in Germany, a drop of 12.1%.

Fully electric passenger cars exceeded 25,3% last quarter of the year; 44% if we talk of all the plug-ins.

Germany achieved a new milestone in December: one out three registered cars were fully electric, 104,325 units.

EVs grow in France, despite an overall market decline

In 2022, passenger car registrations fell by 7.2% in France, almost 120,000 fewer units sold than in the previous year. However, electric vehicles emerged from this crisis with flying colours, growing by 131.5%.

December also set a new record for France, as one out of four new registrations was a plug-in vehicle, of which 15.8% were fully electric and 8.2% hybrid.

Pure electrics got 11.4% of the Portuguese market

Combustion cars still account for almost 60% of sales, but considering the speed Portugal is driving towards zero carbon emissions, we would not be surprised if this country took off for good in 2023.

In clear contrast with the rest of the countries analysed in this article, electric cars had actually a negative growth in Italy last year, with almost 18,000 fewer registrations, which represents a decrease of 26.6%.

Combustion vehicles now account for 47.7% of sales in this country, although it seems that Italians prefer non-plug-in hybrids -34.1% of registrations in 2022. In fact, plug-in cars accounted for 8.8% share, being 3.7% fully electric and 5.1% plug-in hybrids.

Spain, one of the slowest countries towards electric mobility

Plug-in passenger cars did not exceed yet the 10% barrier in Spain in 2022, although we do see an increase compared to the previous year, both in units and in market share.

Spain has a long journey ahead to considerably reduce CO2 emissions from personal transportation.

Electromaps is here to support EV users at each stage of their emobility journey. 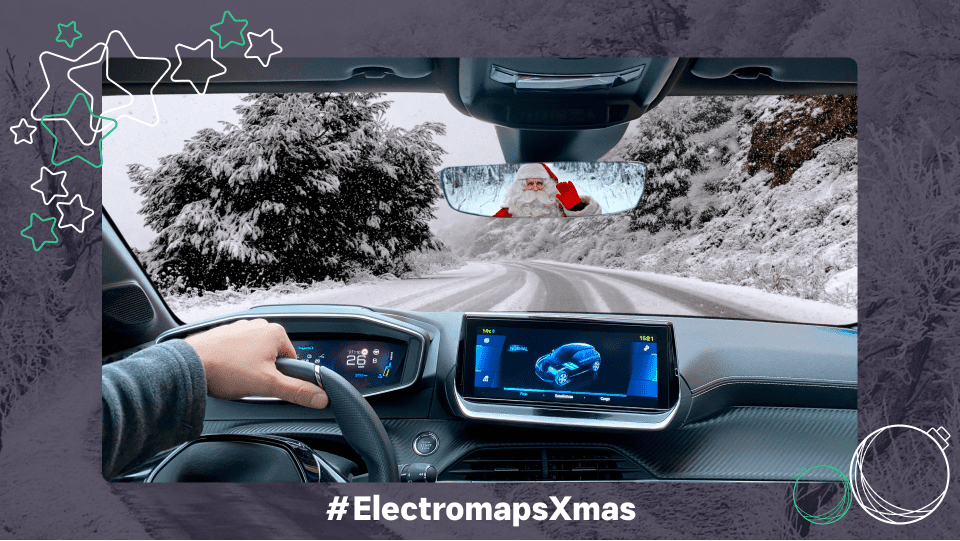 Winners of the Electromaps Christmas Contest 2022

We have invited our users to share photos of their electric vehicle on their way back home for Christmas. And the winners are...
Read more 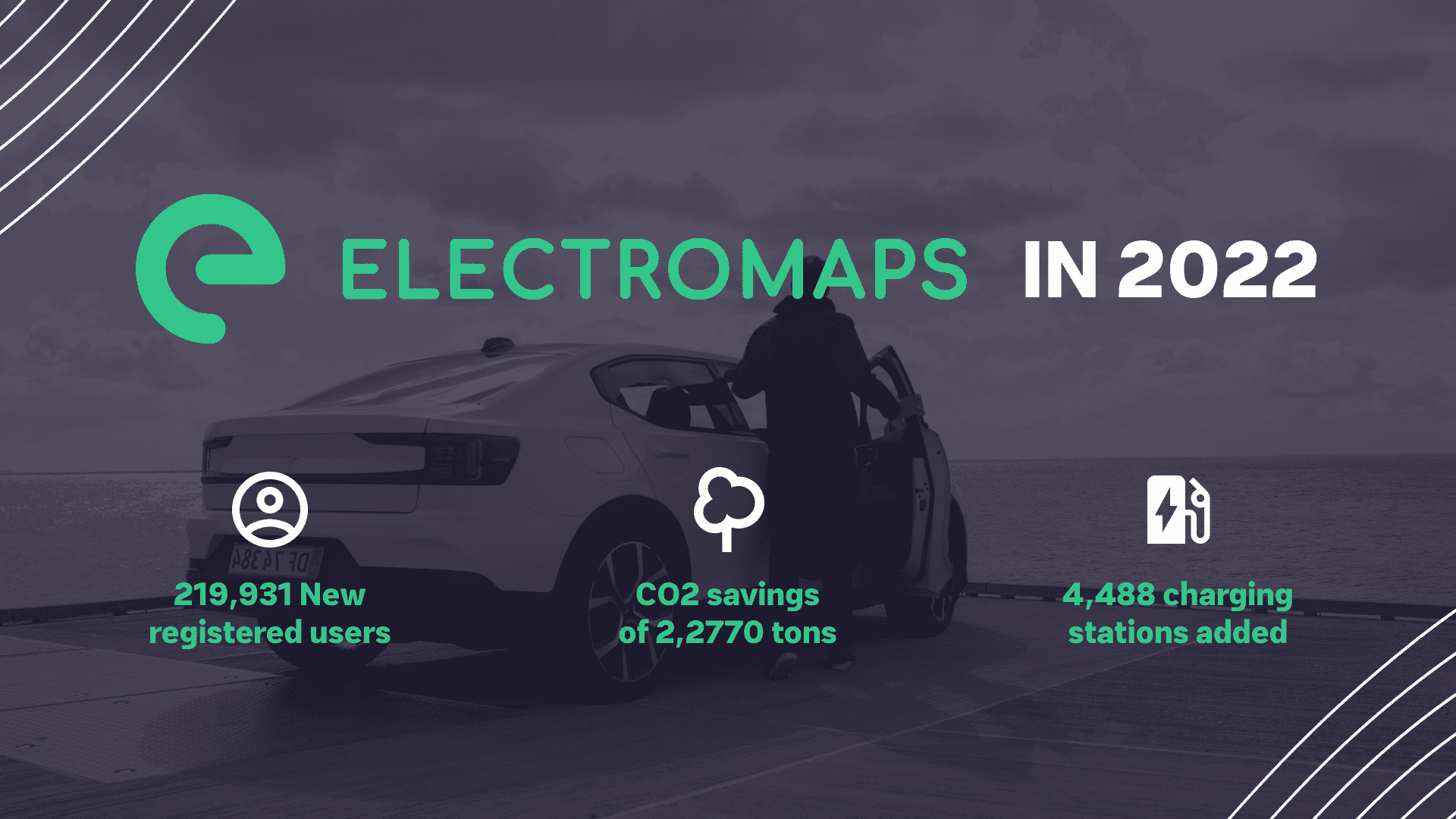 2,770 Tons of CO2 saved in twelve months, doubled the number of our registered users and the charging points connected to Electromaps. And much more!
Read more 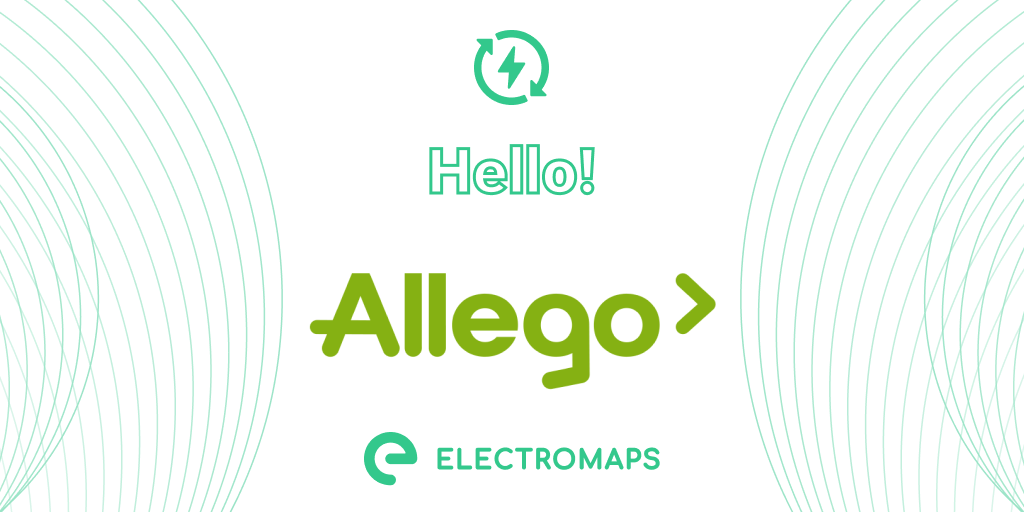 Electromaps has secured a new strategic collaboration that enhances the connection to Allego’s 25,000 charging stations in Europe.
Read more